Motion to waive reading and accept passed by voice vote. 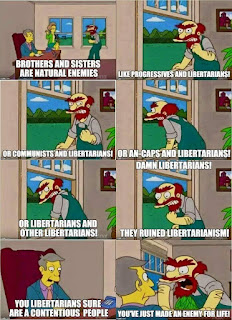 Chair's Report: Year in Review.
Need to better learn parliamentary procedure and Robert's Rules of Order to address issues from last year's convention.  Need to more diligently scrutinize Campaign Finance Reporting documents and processes.  Need to better understand Delaware Election Laws in Title 15.  "The Enemy is not in this Room".  The "enemy" is considering gun control and ignoring cannabis legalization in the General Assembly.  Resolve ballot access questions.  Focus on growth.  159,000 unaffiliated voters.  442,000/675,000 registered voters voted in 2016.  Need 5% to reach "major party" status.  35,000.  Grow from the bottom up.  Get involved in City and School elections that are non-partisan.  Nullification.  Hit the pavement.  Young Americans for Liberty unseated an incumbent in a Texas primary by hitting doors with 14 volunteers.  Nadine in NCCo has done well making phone calls to registered Libertarians in her county.  Share strategies from county-to-county and across the state.  Seek out strategic partnerships on issues of common interest.  Jimmy Brittingham has done well working with DCAN on legalization.  Develop the community.  Don't get personal and lose the moral high ground.  Be the change we want to see in our communities.  Be the example.

Presentation from Dr. Lark.
Honor to be in the presence of heroes.  20 years of attending LPD Conventions.  Next meeting in Denver, 21/22 April.  Things moving in a positive direction thanks to Democrats and Republicans.  Nominated horrible presidential candidates to LP benefit.  Got very lucky in 2016.  After 2014, things were not going in a great direction and then Donald Trump happened.  If Rand Paul had done better, the LP would be in trouble.  Seeing more interest, more and better candidates.  Libertarianism is a philosophy of love.  We may disagree, but as long as you don't interfere with my rights, I won't interfere with yours.  Philosophy of love.  Not just proud about it, smug about it.  International Alliance of Libertarian Parties.  Prospects for presidential campaigns in 2020 are still undetermined.  Adam Kokesh is taking steps.  Larry Sharpe would present a good face, but has made no indications.  Imagine if we'd had Harry Browne in 2016?  Gary was great, but didn't have the gravitas.  Harry Browne did.  Nick Sarwark would be a good successor to Harry Browne.  He's running for Mayor of Phoenix.  A lot of good people in positions that are more valuable.  Politics is a lagging indicator, so people advocating in other areas is potentially more important than running for president, etc.  We're in a 15 round prize fight against welfare-state liberalism.  Libertarianism is the up and coming philosophy.

Presentation from Bob Sigler regarding NORML Call to Action.
Special project for easy cannabis advocacy using NORML website.  Pre-addressed letters to legislators and special interest groups.  Bills are already circulating, public support is there, Canada is moving in that direction, election season is approaching.  NORML has a number of letters for different priorities, including Delaware's legislation.

Presentation from Jesse McVay regarding amendments to the Articles of Association.
Amendments have been posted online as required.  Also posted in the lobby for review during the recess.  Some amendments have already been approved.  Best mechanism for amendments this close to convention is to let the convention amend rather than the State Board.  If you don't understand, vote yes.  If you don't have a substantive complaint, vote yes.  Otherwise, let's talk, but writing a document by committee is difficult.  Some of the more significant changes include: formatting and ease of reading; new statement of purpose; affiliation statement; explicit allowance for ad-hoc state board meetings; limits on membership requiring LPD registration for at least 60 days; revisions to convention voting procedures; specifications of proper notice; disciplinary procedures; credentials committee.

Up or down vote after brief discussion following the recess.  Further amendments can be passed by the State Board for any issues.

Comments from Steve Stutzman about Libertarian leaning individuals in Milford who are community leaders involved in school and municipal arenas.  Civil disobedience opportunities.